GOOD NEWS. I have just received the jacket cover for my book Deverell's Dilemma. The publisher has even used my title, which they don't often do. I understand it will be available sometime in February 2012 at Amazon and Barnes & Noble. 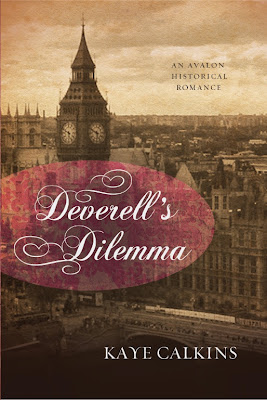 It is exciting to finally see it coming together. Can't wait to hold it in my hands.
Here's a teaser:
It was just another dinner party until Alexandra shows up, a ravishing auburn-haired beauty. Deverell Bromfield doesn't recognize her as the spindly legged redhead with the fly-away hair he'd known as a youth. He hasn't trusted women since Ariadne threw him over for a viscount. Can he set that aside to pursue the delightful, unpredictable Alexi?
At last convinced she truly loves him, he wants to marry her, but scandal rocks his family. His brother is accused of murder. Alexi's father forbids the match. Deverell searches for Nat to assure himself the boy is safe. He finds him in the backstreets of London, working in a warehouse. Determined to save him and win  Alexi's hand, Deverell sets out to find the real killer only to discover the evidence points to her brother. She is infuriated by his pursuit of her brother.
The enticing Ariadne, now widowed re-enters Deverell's life with information he needs to prove the real murderer's guilt. Will she lure him back to her arms?
Deverell is on the horns of a dilemma.

My Favorite Authors Through the Years II

Georgette Heyer has been one of my all-time favorites for at least 45 years. I know, I'm giving away my age. She is one of the authors whose books I have collected and re-read several times. My sister-in-law and I discovered them in the library and took great delight in trying to out-do each other in the use of Heyer's famous cant terms. Some of my favorites are 'dicked in the nob', 'faradiddles', and 'make a cake of oneself".
Miss Heyer's use of humor and witty stories along with her description of the Regency period sparked my interest then and still does today. The ball, the dress, the courtly manners drew me right in. But I loved even more the heroines who spoke their minds and ignored the strict rules of the day.
The irrepressible Leonie and the dangerous Duke of Avon make for an unlikely hero and heroine in These Old Shades, but the story is delightful and one you will long remember. Faro's daughter, The Grand Sophy and Frederica are also enchanting along with the more than fifty books written by Miss Heyer.
She was a very private person and because of her success was forced to keep her life hidden from the public. Her first novel was published at nineteen, but her breakout book was These Old Shades published in 1926. She was her own greatest critic and would be amazed at the number of people who still read and adore her work.  If you like English history you MUST read Georgette Heyer.
Posted by Kaye at 7:05 PM 1 comment: